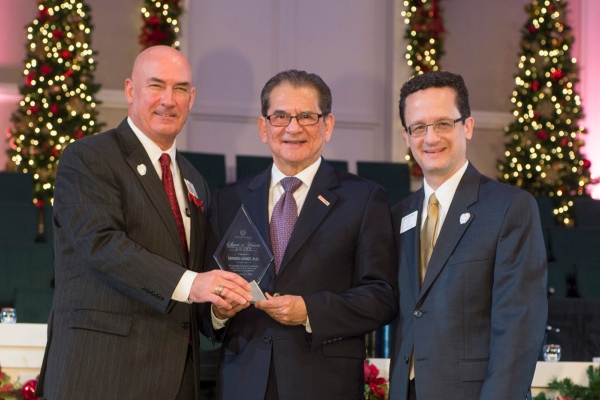 Dr. Ernesto Gomez, founder and CEO of CentroMed, an accredited Federally Qualified Health Center that has been serving the San Antonio community for more than 40 years, is the recipient of Baptist Health Foundation of San Antonio’s 2016 Spirit of Health Award. Each year the foundation recognizes someone who makes an outstanding contribution to improving community health. The event was held on Tuesday, December 13th, 4:30 p.m. at First Baptist Church San Antonio.

Dr. Gomez won this award for his dedication and commitment to providing health care to San Antonio’s underserved communities since 1973. CentroMed began as a family counseling program for low-income residents called El Centro del Barrio. It has since grown to 24 service sites in Bexar and Comal counties providing health care to more than 78,000 unique patients a year. Of those, some 47 percent lack insurance and 38 percent of patients are children or youth.

As a young man growing up in San Antonio’s West Side, Ernesto Gomez was a leader who had a strong desire to help his community. He was the 13th child of 14 growing up poor in an impoverished and gang-ridden neighborhood in the 1950s. Prior to creating CentroMed, Dr. Gomez served as a social worker and program director at the Wesley Community Centers. He also worked as the assistant director/community organizer for the Mexican American Neighborhood Organizations in San Antonio. Dr. Gomez earned his Doctorate of Philosophy from the University of Texas at Austin, and his Master’s and Bachelor’s degrees of Social Work from Our Lady of the Lake University.

Dr. Gomez’s career path includes academic appointments at the University of Texas at Austin and Our Lady of Lake University (OLLU) in San Antonio. As a tenured member of the faculty at OLLU Worden School of Social Work, Dr. Gomez served as Principle Investigator for several research and mental health training grants awarded by the National Institute of Mental Health. His work in mental health training and research engaged students in field work which led to the establishment of community service sites in San Antonio barrios, which ultimately served as the foundation for the founding of CentroMed.

Dr. Gomez has served on numerous boards of directors, including: The National Healthcare for the Homeless Council, the Texas Association of Community Health Centers, The Center for Health Care Services, the San Antonio Medical Foundation and the Bexar County Community Health Assessment Advisory Council. He was appointed to President Jimmy Carter’s Commission on Mental Health, served on the Task Force on Primary Prevention and the Ethics Committee for the Texas Department of Human Services. Dr. Gomez has been awarded the John D. Rockefeller Third Youth Award; the Lifetime Achievement Award presented by the National Association of Social workers; and was inducted to the Mexican American/ Hispanic Physician Association Hall of Fame. He has written extensively with special focus on the indigent health care, mental health, and the Hispanic community.

Dr. Gomez and his wife, Judy, have four children and four grandchildren. He joins a list of esteemed past recipients of the Spirit of Health Award including Lindsey Painter, a New Braunfels teacher who donated a kidney to one of her students; Fernando Guerra, MD, former Director of Health for the San Antonio Metropolitan Health District; George Gaston, PhD, retired Vice President of Mission and Ministry for Baptist Health System; and Jim Potyka, MD, a former Baptist Health System Emergency Department Physician.