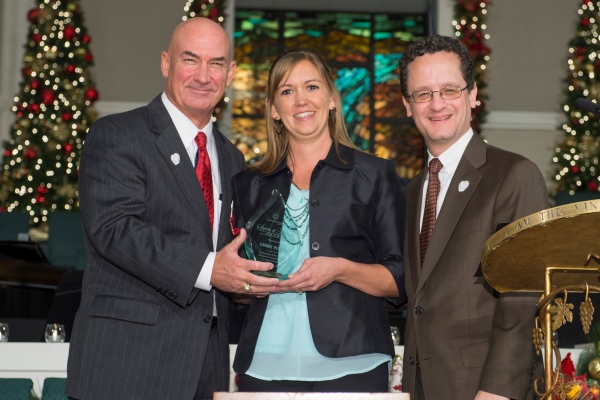 A teacher who donated one of her kidneys to a student in her first-grade class is the recipient of the Baptist Health Foundation of San Antonio’s 2015 Spirit of Health Award.

Each year BHFSA honors someone who has contributed to improving community health. Painter won this year’s award for saving her student’s life and also for shining a spotlight on living organ donation by sharing her story with people from around the world.

Matthew Parker, one of three triplets in Painter’s first grade class at Hoffman Elementary School near New Braunfels, was diagnosed with end-stage renal failure. A previously transplanted kidney was failing. The little boy was able to attend class only two days each week due to dialysis treatments three days a week.

Matthew’s parents, who had been searching for a donor for approximately two years, took their search to the media. When Painter became aware of their situation, she volunteered to be tested. Hospital personnel told her there was only a one percent chance that she would be a match, or even that a second donor would be found for Matthew.

On Christmas Eve, Painter received the call that she was a match for Matthew. She began the lengthy process of preparing for the kidney donation, using her personal time to undergo testing, blood work and other screenings prior to the transplant. After a successful surgery on March 19, both Painter and Matthew are fully recovered and back at school five days a week.

Her story received widespread coverage in national media ranging from ABC News to People Magazine. Painter lives in New Braunfels with her husband and her two sons, ages 10 and 6. In her honor, BHFSA will donate $500 to Transplants for Children, an organization that assists children and families with the challenges associated with organ transplantation.

“Though not a member of the medical community, Painter’s contributions to improving the health of the community are significant,” said Cody Knowlton, President and CEO of BHFSA.

“Mrs. Painter’s selfless gift to her student not only saved the life of a six-year-old boy, but also helped educate the world about living organ donation through her experience,” Knowlton said. “Her story sparks inspiration and encouragement to those needing organ transplants and those who can help them.